An introduction to taste & flavour

By Jason
Photo by Anastasia Zhenina on unsplash.com

Taste: the sensation of flavour perceived in the mouth and throat on contact with a substance

Flavour: the distinctive taste of a food or drink.

Many factors affect our ability to recognise and appreciate taste, some which will surprise you, others that are pretty obvious, beyond just seasoning with salt and pepper, but those two staples are a great place to start taking a deeper dive into taste and flavour.

Salt is the only rock we eat and digest and is an onomatopoeic food in that is sounds like it tastes! Quite literally salt, tastes salty! Historically used as a mechanic for trading, salt (or sodium to be precise) is an essential mineral in that it has to come from our diet as our body doesn’t produce it – critically it facilitates actions such as nerve impulses and can work as a muscle relaxant.

It can be used as a preservative by altering water activity and preventing microbial growth, and is a catalyst in many baking techniques such as creating crusts on yeast breads or prompting the rise in Yorkshire Puddings.

From a taste point of view, it wonderfully draws out more from the other four remaining palette sensor attributes, enhancing sweetness and toning down bitterness. Subscribers, looking to our beef burger may recall that natural salts added a binding functionality as it assists with the gelling process of proteins, and in our chicken liver parfait, salt aids in the colour retaining process, by reducing oxidisation.

In all its forms, coarse and fine rock, sea crystal, Himalayan pink & block, it is a chemical compound, that when unrefined contains trace minerals beyond just sodium (around 40%) and chlorine (or chloride – around 60%). Iodine is often added to assist mineral balance in our human daily diets.

Pepper is a spice, graded by heat, colour and fruitiness, peppercorns are harvested from several different trees and shrubs throughout equatorial climates and are often characterised by the colour of the ‘corn’ (see our notes below for the differences).

The quality of pepper depletes in potency once its ground – which is why cracked pepper from a grinder always tastes more… peppery! It will also burn if cooked in too high temperatures that applied direct to it but it can really amplify flavours when treated with balanced respect – mashed potato is supremely elevated from a flavour point of view by adding freshly ground white pepper. Likewise, vichyssoise (a thick soup made of boiled and puréed leeks, onions, potatoes, cream, and chicken stock) without a sweet heat back note is not the same. Steak au Poivre which is crusted in a combination of pink, green and cracked black pepper is a celebration of its pure qualities.

Major factors that can affect our taste

Ever had a meal on a plane and thought it was a bit ropey? Blame the altitude rather than the people who made it!

Despite the fact that airplanes are well-pressurised, our bodies change in the air to adapt to the atmospheric pressure surrounding us… and this goes for our taste buds as well. Studies conducted in Germany by the Fraunhofer Institute for Building Physics, have demonstrated that our sense of taste decreases by about 30% when we are at high altitudes.
So it’s not the food itself that deteriorates in flight, but the human body that is reacting to the high altitudes.

One of the reasons for the lack of taste is our decreased sense of smell. Thanks to the filtered air conditioning, the mucus in our nasal passages gets dried out, impeding our sense of smell. And since the way we taste food depends 80% on how it arrives to our noses, it’s reasonable to expect food to seem less inviting on planes.

When developing airline meals for Virgin Atlantic back in the early 2000s, I had to focus on amplifying the flavours and ‘over seasoning’ while on the ground, ahead of final tasting sessions conducted in the air. Drinks are also affected so the selection of wines, beers and coffees in First Class would be chosen not just for paring with the food menu, but to resonate the known characteristics of the drink in the air such as hoppy and bitter IPA when it came to beers and deep roast Arabica coffee.

Whether a food is eaten hot or cold will also affect the flavour profile. As a young chef, we were classically taught to make vol-au-vents. Tasting the flavour of the bechamel or velouté when cooking out the roux and tasting while hot can leave the final product eaten cold seem under seasoned and lacking in flavour punch, so we were taught to work to the finished product.

Other food and drinks eaten around the same time

How awful does fresh orange juice taste after brushing your teeth with minty toothpaste? Eating chocolate then drinking Ribena makes the perception of the blackcurrant cordial far less sweet.

The reason is that when we taste something it sets off a set of chemical reactions at a molecular level on how the human tongue receptors, react and send those sensation messages to your brain to process taste.

Heston Blumenthal is credited with being the founder of Molecular Gastronomy, a drive to find foods and drinks that complement each other at a molecular level, even though we naturally may not eat them. A good examples are foods such as white chocolate and caviar and for anyone looking for a deeper insight into this, look out for Professor Charles Spence’s book Gastrophysics: The New Science of Eating.

Around 80% of what you taste comes from how we smell it, against 20% that comes from the mouth and tongue. So anything that can influence smell, such as a blocked nose or a smelly gas can cause chemical reactions that alter what we perceive the flavour of the food to be.

The next time you don’t like the taste of something that everyone else enjoys, it may well be worth considering some of these factors to see if you might change your mind…

A little more on salt and pepper

Sodium is an essential nutrient but is something that the body cannot produce itself. It plays a vital role in the regulation of many bodily functions and is contained in body fluids that transport oxygen and nutrients. It is also essential in maintaining the body’s overall fluid balance.

To survive everyone needs to consume Sodium regularly.  An adult human body contains about 250g of salt and any excess is naturally excreted by the body.

Sodium enables the transmission of nerve impulses around the body. It is an electrolyte, like potassium, calcium and magnesium; it regulates the electrical charges moving in and out of the cells in the body. It controls your taste, smell and tactile processes. The presence of sodium ions is essential for the contraction of muscles, including that largest and most important muscle, the heart. It is fundamental to the operation of signals to and from the brain. Without sufficient sodium your senses would be dulled and your nerves would not function.

Chlorine too is essential to good health and is a fundamental element in the digestion process. It preserves the acid-base balance in the body. It aids potassium absorption. It supplies the essence of Hydrochloric Acid in the gastric juices used in the stomach to help us break down and digest the food we eat and control the level of bacteria present in the stomach. It also enhances the ability of the blood to carry carbon dioxide from respiring tissues to the lungs. 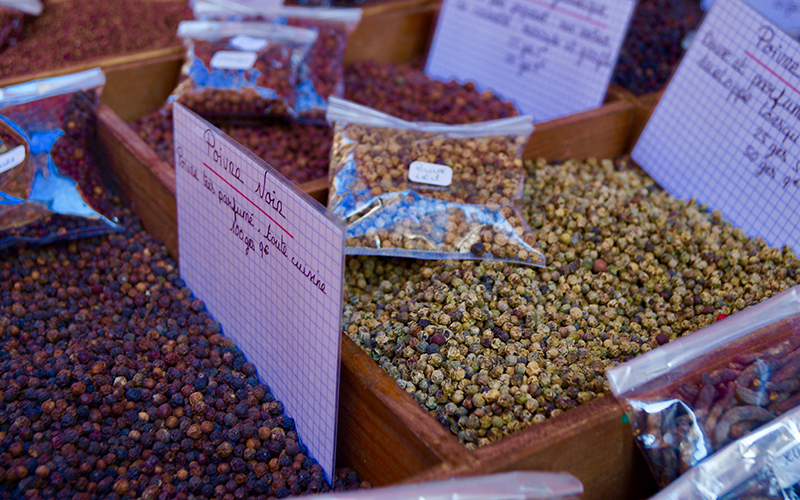 Black Peppercorns
The most common variety, black peppercorns are just cooked green peppercorns that have then been left out to dry. They have the strongest, most pungent flavor. Freshly ground, they’re the ideal seasoning — along with salt — for pretty much anything. There are many varieties, including Tellicherry, which comes from Southern India and has a sweet, well-rounded taste; Brazilian, which is particularly harsh; and Lampong from Indonesia, which leaves a citrusy, slow burn.

Green Peppercorns
These are underripe black peppercorns that typically come in brine or vinegar, tasting fresh and tart. They might also come dried, but it’s more common to see them in brine. Slightly spicy and aromatic, they’re great for flavoring sauces for meat dishes.

White Peppercorns
White peppercorns are black peppercorns where the skin has been removed. They have both a fiery, but also less pungent taste, and are good for light-colored sauces and foods.

Red Peppercorns
These peppercorns, left to fully ripen on the vine, turn a brilliant shade of red. It’s rare to find red peppercorns as is; they’re typically dried to then develop a black coat, or dried and stripped of their coat to become white peppercorns.

Pink Peppercorns
These aren’t actually peppercorns at all, but are instead berries that come from a South American shrub. Though they still have a peppery bite, they also have fruity and floral notes. They’re best for garnishing.  Crush them in a spice grinder or with a knife rather than a pepper mill, because they are so delicate.