The long read: Should I go vegan?

As we launch Elevated with our vegan month, James goes through the pros and cons of going meat-free.

According to a survey by a shopping comparison site, the number of vegans in the UK skyrocketed by more than 40% in 2020. The study by finder.com showed the number of meat-free eaters in the country raising from 1.1 million at the start of the year to just under 1.5 million by the year end.

As survey stats are extrapolated from small samples to reflect the view of the entire nation, it’s always wise to take them with a pinch of salt, which is probably why the Vegan Society prefers to look at more defined figures such as the number of registered vegan products bearing their logo which increased by 50% from 2018 to 2019.

Such increases obviously show that veganism is on the rise – and a walk around any supermarket cold aisle backs that up anecdotally. The amount of faux meat products now on offer can be mind boggling.

Despite these increases, veganism is not a new phenomenon. Ancient religions such as Jainism in India and Taosim in China preached meat-free eating for hundreds of years BCE, while in countries such as Japan, eating meat was even banned in the 700s.

Like most things today, the argument over whether to go vegan or not is highly polarised and highly charged. People’s reasons for going vegan are often disparate too: some go meat-free in support of animal rights, others believe it’s kinder to the planet, while some do it as they believe it will improve their overall health or sporting performance.

Our philosophy at Elevated remains for us to be ‘educational rather than evangelical’, which is why we’ve decided to lay the facts out from a nutrition point of view to allow you to make your own choices. For the record, neither myself nor Jason are vegans, although we have both experimented with veganism. For various personal reasons, we are both flexitarian omnivores who enjoy a number of delicious meat-free days every month and meat in moderation.

The term vegan was coined by British carpenter and vegetarian Donald Watson in 1944 after a TB outbreak amongst the country’s cattle population began to discourage people from dairy produce. His first Vegan Society newsletter had just 25 subscribers.

Veganism and your health

You may lose weight on a vegetarian or vegan diet. One 2016 study (1) conducted a meta-analysis (the highest level of scientific review, see here for details of how we rate the evidence of such reviews) of 12 randomised control trials and found that subjects on a vegetarian diet lost significantly more weight than those in non-vegetarian diet groups. That weight loss was even more significant when it came to vegans and still more pronounced in vegans who also restricted their calories – although it is likely that in the latter category, calorie restriction played a large role in this.

In 2017, researchers from the Department of Experimental and Clinical Medicine at the University of Florence in Italy conducted a weighty systematic review into the association between a vegan diet and chronic diseases (2). The authors crunched the numbers of 96 studies in this top-level review and found that vegan diets were associated with reduced levels of body mass index (BMI), total cholesterol, LDL-cholesterol (supposedly the ‘bad’ cholesterol), and glucose levels in vegetarians and vegans versus omnivores. The study also concluded that vegans had fewer incidences of heart disease and cancer, although the evidence was deemed sketchier for specific types of cancer.

A number of different studies have shown that vegan and/or vegetarian diets may help with type 2 diabetes. One of the most prominent was published in 2019 (3) when researchers from a number of Italian institutes, including the Italian Society of Diabetology, got together to look into how six months or more of different diets affected diabetes control and management. The team assessed a number of trials on various eating plans including low-carb, macrobiotic, vegan, vegetarian, Mediterranean and intermittent fasting diets and compared them to more traditional low-fat diets. They concluded that vegan, vegetarian and Mediterranean dietary patterns should be used in public health strategies moving forward.

Anyone who’s seen the movie The Game Changers (pictured) will be aware of the growing number of high-level sports personalities who have converted to veganism. Add to those who starred in the film, add the like of tennis superstar Venus Williams, F1 champ Lewis Hamilton, former Premier League striker Jermaine Beckford, ultramarathon legend Scott Jurek and gridiron star and activist Colin Kaepernick and it’s an impressive list.

Anecdotal evidence for their prowess includes reports of reduced inflammation, reduced fatigue and improved strength. The counterbalance to all that is, of course, the number of world stars across all sports who are confirmed omnivores. One review into vegan/vegetarian diets and athletic performance (4) found that:

“Consuming a predominately vegetarian-based diet did not improve nor hinder performance in athletes.”

However, that conclusion was based on just eight identified studies, so the jury remains out on veganism and sporting performance. For those who are interested in following that route, some good advice can be found in this informative article.

When it comes to pregnancy, making sure the baby and mother are both healthy is naturally the main concern. Despite this, there are few studies into how vegan diets may affect pregnancy and gestation. A 2015 systematic review in the International Journal of Obstetrics and Gynaecology (5) found just 21 viable studies for analysis and found the evidence to be inconclusive on whether veganism would harm or help foetal development. As such, the authors concluded that vegan diets were safe in pregnancy, providing attention was paid to certain potential nutritional deficiencies associated with veganism (see below).

A word of caution

It’s tempting given some of the above to think that veganism may be a panacea for a number of different conditions. It’s important though to highlight that some studies have shown that veganism can have unproven, negligible or even detrimental effects.

One systematic review into how different diets could affect rheumatoid arthritis found the studies it assessed were too small or open to bias to come to a conclusion (6) , another found little difference in the gut bacteria of vegans and meat eaters (7). Another recently published review (8) concluded that those who avoided all meat consumption had significantly higher rates or risk of depression and anxiety.

Others, meanwhile, argue that while death rates of vegans/vegetarians compare positively with those of the general population, that other factors might be at play such as high levels of physical activity and low alcohol, cigarette and drug use (9) associated with those who take care of their diet. 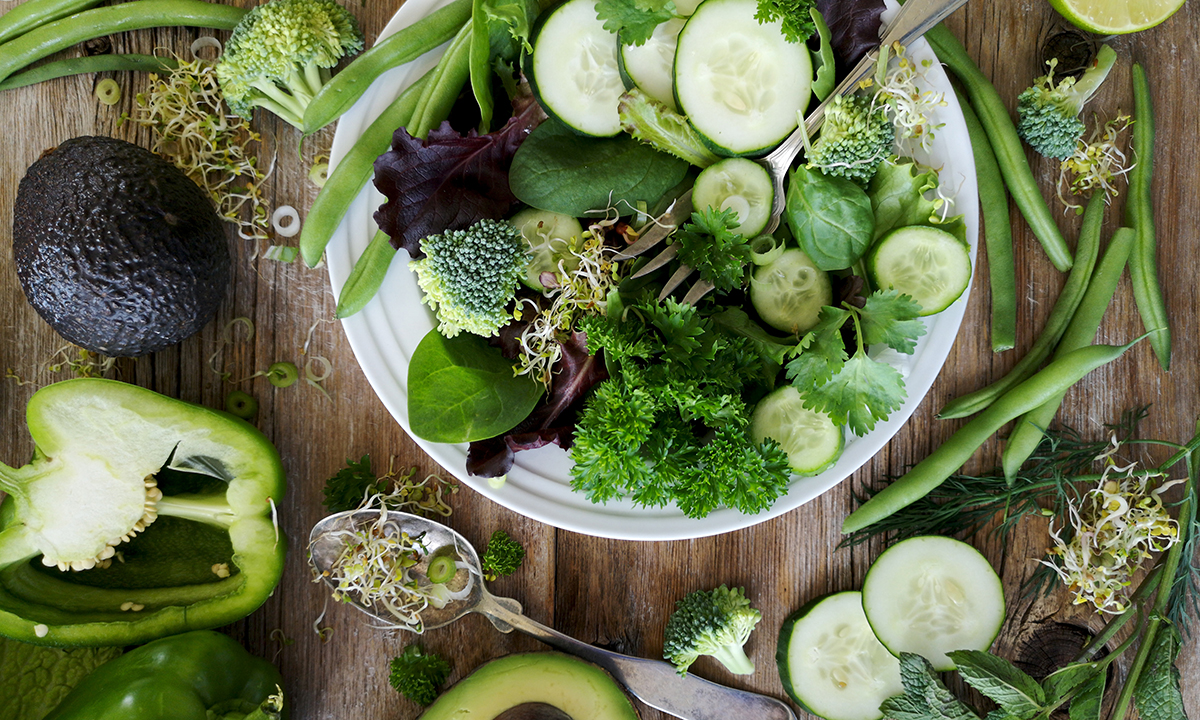 Protein is super important when it comes to our health. Adequate protein is needed to help create and maintain our muscles, skin, organs, tendons, hormones, enzymes and neurotransmitters.

Given the lack of animal protein in vegan diets, the question most vegans are asked is ‘where are you getting your protein from?’ The answer is, of course, from plant-based foods, many of which are high in protein.

Where there are potential problems is when it comes to the building blocks of protein – amino acids. There are 20 amino acids, nine of which are considered ‘essential’, meaning we can only get them from our diet. Meat, eggs and dairy contain the full contingent of essential amino acids (EAAs) and are called ‘complete proteins’, whereas soya is the only plant source of complete protein.

The most common combinations are:

Protein powders are another way to help ensure those going meat-free get a full range of amino acids. Many protein powders contain artificial sweeteners though that can lead to other issues, so it’s wise to research the market before ordering. Two companies that we particularly like at Elevated at Vivo Life and Supernova Living.

There are a certain number of micronutrients and essential fatty acids (EFAs) that are more readily available in animal products that vegans need to be aware of.

Calcium – important for strong teeth, bones and electrical impulses that regulate muscle function and heart rate – is usually associated with the high levels found in dairy, but a number of vegetable sources exist. One cup of collard greens contain as much as a glass of cow’s milk, while tofu, dried beans and almonds are other good sources.

Iron is needed for red blood cell production and a lack of iron can lead to diet-related anaemia that will leave a person fatigued and susceptible to illness. It’s somewhat a myth that vegans/vegetarians don’t get enough iron as leafy greens are just one good source. The main difference is that haem iron – that comes from animal produce – is thought to be more bioavailable than plant sources . To counteract this, vegans are advised to take a source of vitamin C such as orange juice at the same time as consuming iron-rich vegetables such as beans and water cress.

Vitamin B12 can be lacking in vegan diets as it is naturally only present in meat products. Essential for a whole host of bodily functions, including helping make DNA and healthy blood cells, it can be found in fortified foods such as nutritional yeast and plant milks. Alternatively, a good supplement can help.

Finally, there can be a temptation when changing to a new diet to focus on ‘old favourites’. It’s possible to be a vegan and eat only crisps, chips and some chocolates. As ever, the quality of food you eat is as important as your choice of dietary intervention.

Our April recipes should help you with some good choices…